Italy is divided into 20 official regions, similar to states or provinces. Each region has a different cultural heritage and different food and wine styles, based on the historical domination by other cultures through the centuries. The wealth of wine grape cultivars present in Italy has no equals; each region has a number of indigenous grapes that are used to craft the local wines which compliment the local food recipes. There are more than 300 wine grape cultivars in production in Italy and another 700 more grape cultivars are kept in botanical libraries ready to be rediscovered and reintroduced into production by nostalgic or visionary wine producers. Due to the fact that some of these regions have similar characteristics, we have grouped them into 6 macro-areas. These characteristics are due to natural elements separating them such as mountain ranges, proximity to the coast or geographic latitude. 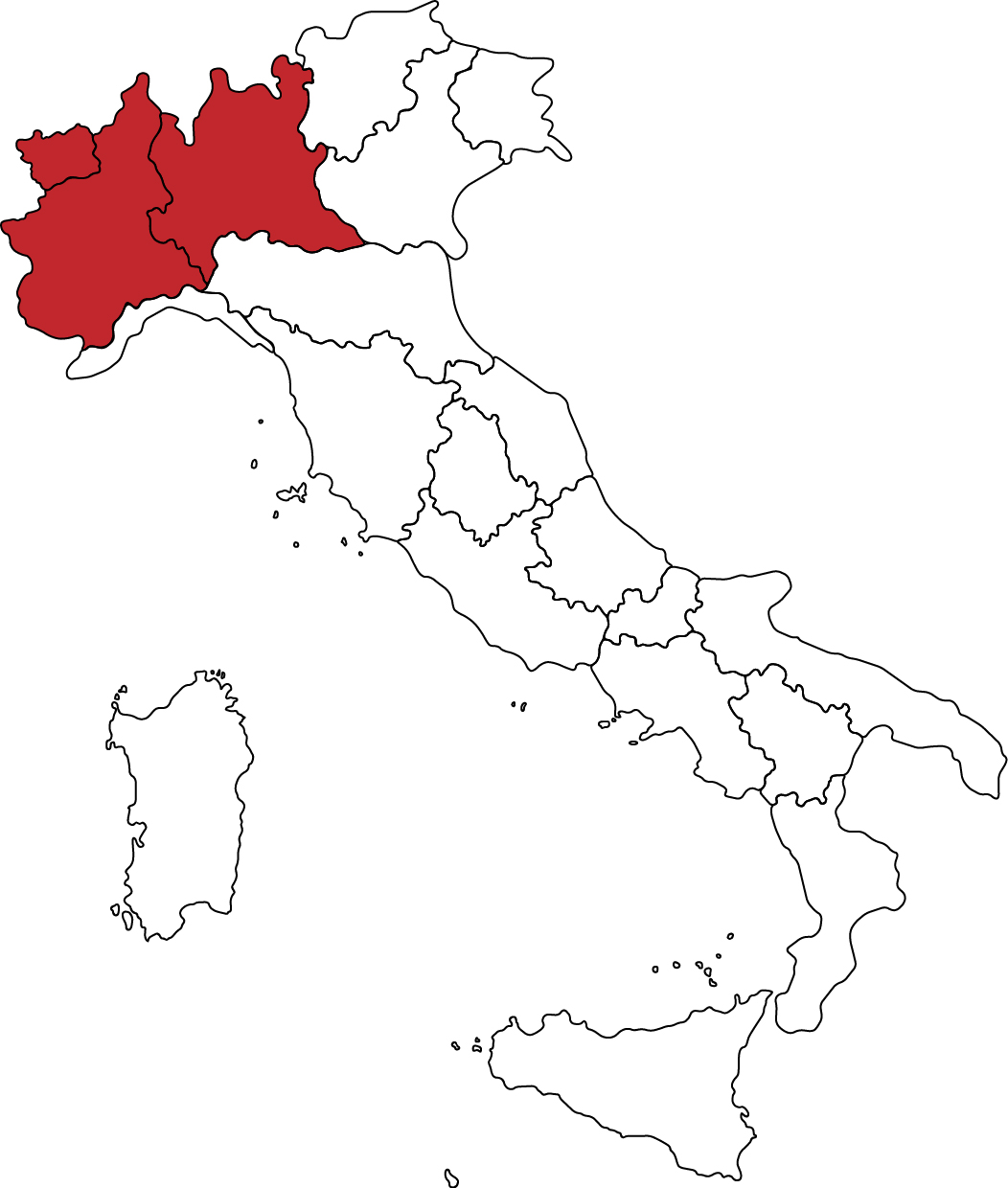 This region is divided by mountains that shield the grape growing areas from winter’s most frigid winds, yet the climate is still brisk in comparison with other parts of Italy. Because of the weather, the wines can be somewhat austere but are also blessed with distinctive personalities.

Although the areas in the Northwest can differ much from one and another, there are some characteristics to appoint. The reds tend to be full-bodied and long-lived, like the aristocratic Barolo, and the dry whites (especially those of the Aosta Valley) are crisp and fruity. The Northwest is also a major producer of outstanding sparkling wines, like the sweet dessert wine Asti Spumante and the dry sparklers of Franciacorta in Lombardy. The terroir is every bit as potent as Bordeaux or Burgundy, taking advantage of the steep hills of the mountains that provide drainage and fertile land.

The main grape cultivar of the North Western Region are: 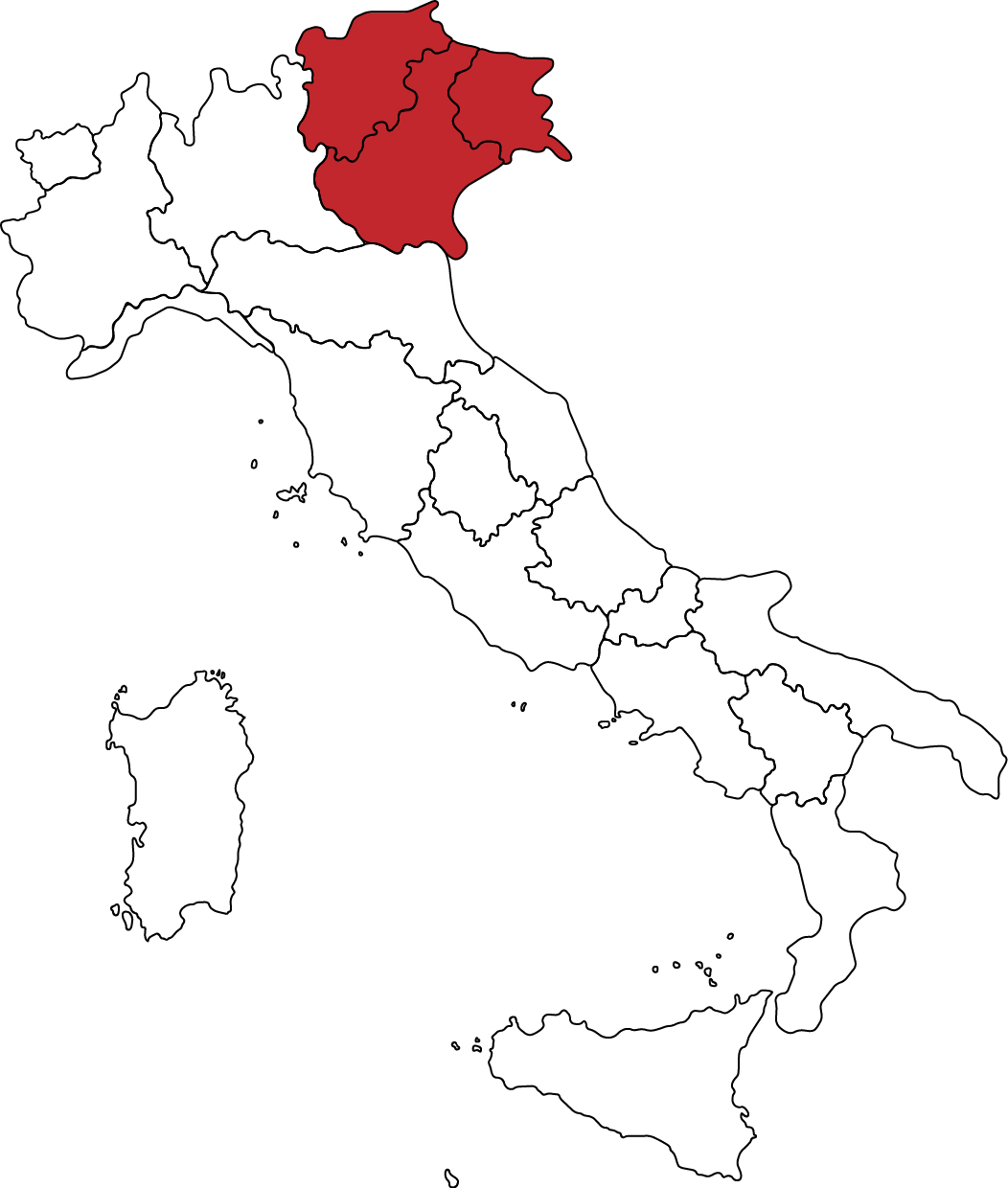 During the winter months the Dolomites and ranges of the Alps protect north-eastern Italy from frigid air currents that sweep down from Siberia, while the Swiss mountain chain acts as a bulwark against the icy winds blowing south from the North-Atlantic. The climate of the area is much cooler than in other regions, and the extensive system of foothills and valets in the shadows of the peaks provides a multitude of different soil types and exposures for vineyards at altitudes up to 1000 meters. That, in turn, produces wines with pronounced personalities and especially delicate, aromatic whites.

The flatlands in the south are much warmer, so that growers there must constantly battle the vine’s natural fertility through use of severe pruning to assure higher quality. Both regions are strongholds of wines made from single varieties, limited by the DOC rules to use no more than 5% of other grapes. Although red wines (often never exposed to wood) still lead in the region, the production of white wines is steadily growing. The north-east is also known for its production of one of Italian’s most famous wines: Amarone, vinified from partly dried grapes of the same varieties that make Valpolicella.

The main grape cultivars of the North Eastern Region are: 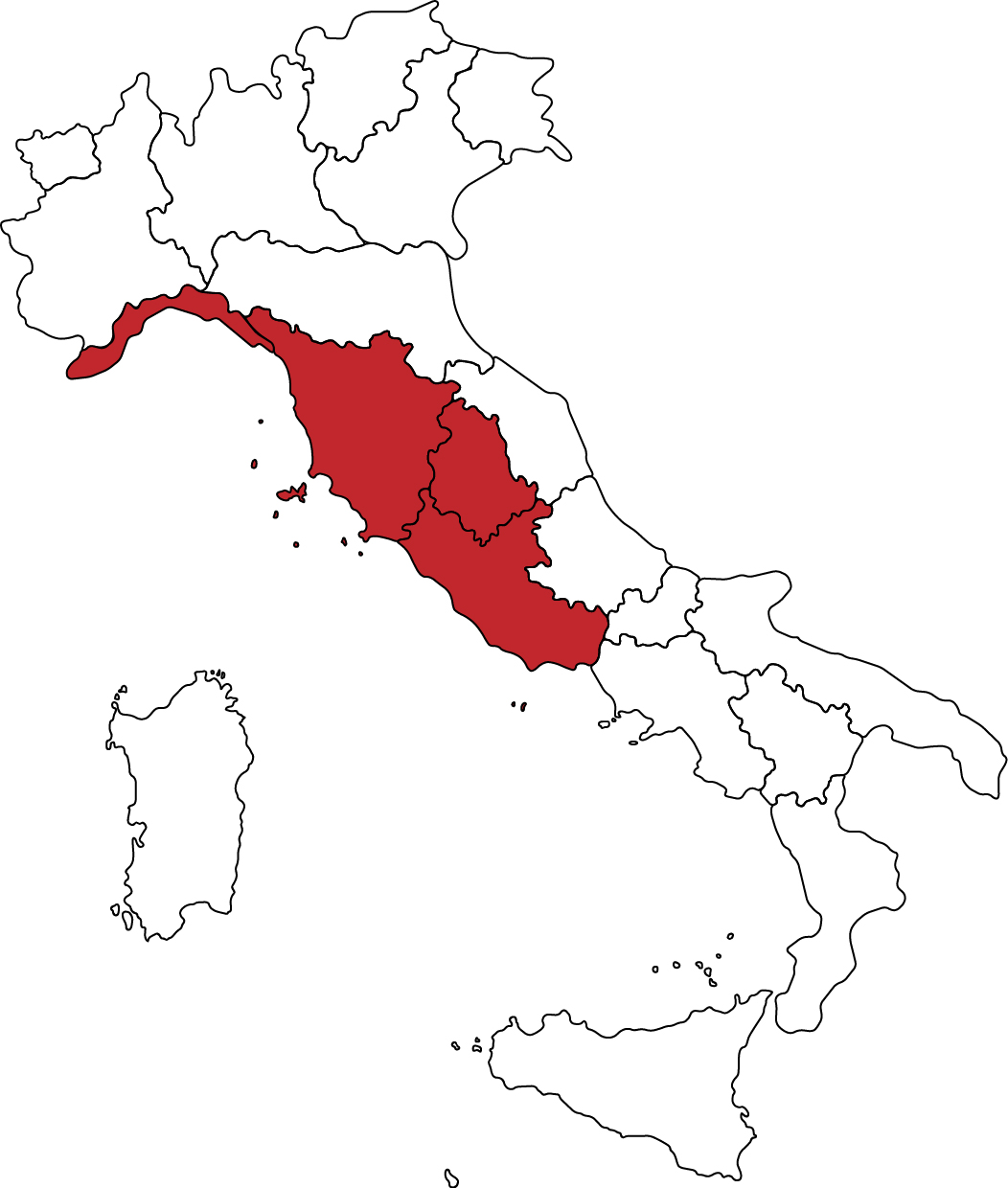 The area’s climatic pattern is determined by the Tyrrhenian Sea, to the west and south, and by the Apennine Mountains, to the north and east, which temper the heat, ensure rainfall in the summer and shield the steep hills and few valleys from the cold of winter. The soils are highly varied, with clay, which was laid down in remote geological periods, predominating in the north and rich volcanic terrains in the south. Limestone is the principal element along the line of the Apennines.

Tuscany, which owes its name and much of its culture to the ancient Etruscans who settled there, is the leading winemaker among the area’s three regions. The Etruscans are credited with bringing the vine to central Italy, or with radically improving its cultivation there. The region has been a leading wine producer since ancient times. However, its worldwide reputation for premiumquality, long-lived reds is relatively recent. Winemakers have principally used Cabernet Sauvignon and Merlot, and recently Syrah, alone or blended with Sangiovese, in making Tuscan giants. Recently they have begun experimenting with other varieties, sometimes foreign (for example, Petit Verdot) and sometimes resuscitated natives (for example, Colorino and Mammolo). Most Tuscan whites are derived from the Trebbiano variety. They are fresh and drinkable even though not suited for extended aging. As in the fields of red, the wine makers are tapping the resources of other lands to produce whites of increasingly finer class and consistency. Chardonnay and Sauvignon Blanc are their vehicles to international stardom, although other varieties are given close attention.

The main grape cultivars of Central Western Region are: 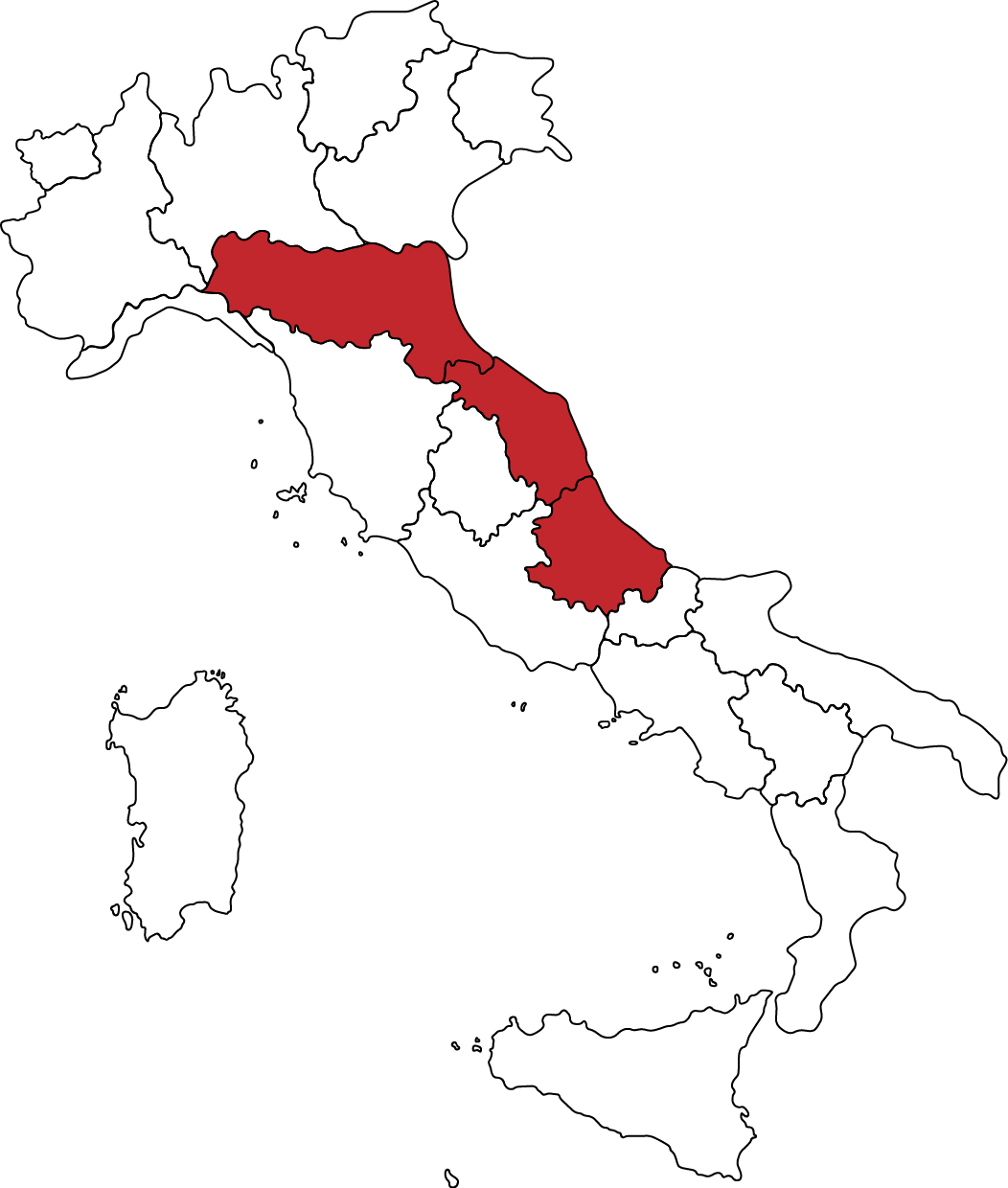 The climate of the Apennines’ eastern slopes is shaped by the waters of the Adriatic, which mitigates the ferocity of the chilly winter winds from the Balkan and ensure substantial rainfall at all times of the year. Except in the flat plan of Emilia-Romagna in the north, virtually all of the wines are produced on the slopes of the mountains and their foothills in long line stretching from the border of Lombardy in the north to Apulia in the south.

That exception, the Emilian plain, is a prolific producer of Lambrusco, the bubbly red that, in its sweetish version, was long a mainstay of Italian wine exports. Fully dry Lambrusco serves as the red wine for all meals throughout Emilia. In the Marches the wine list is headed by the dry white Verdicchio, which first caught the attention of domestic and foreign consumers because of its unusual, amphora-shaped bottle. The Marches also produces an extremely drinkable red, Rosso Conero, which is still not as widely known as it deserves to be. Farther to the south, in Abruzzo and Molise, the native Montepulciano d’Abruzzo variety yields a full-bodied red wine that superbly complements the hearty dishes of the local cucina. Many first-rated producers are now turning out extremely elegant and long-lasting versions of this once rustic wine.

The main grape cultivars of the Central Eastern Region are: 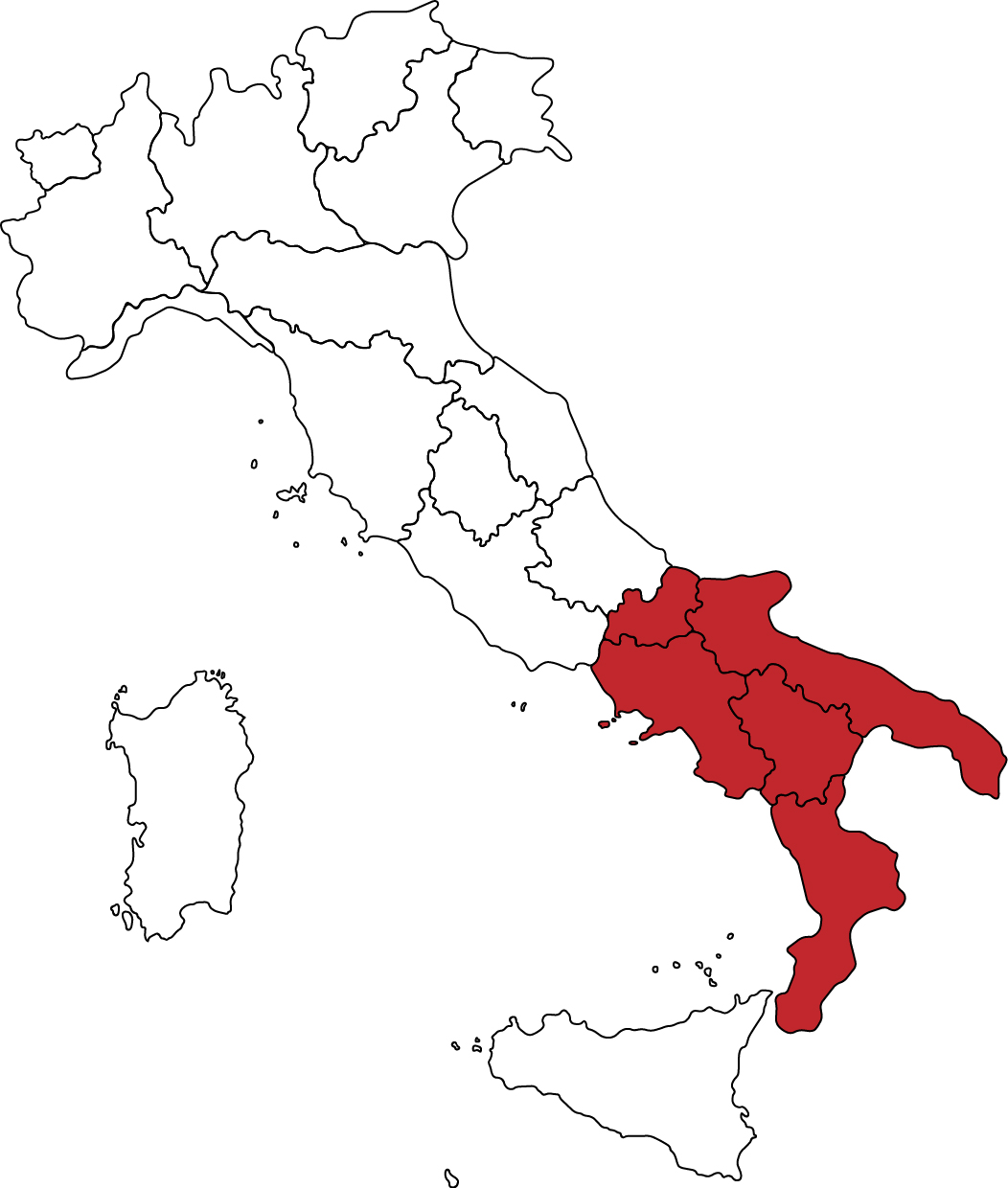 While the sun is the vine’s friend, too much sun is the winemaker’s enemy, a rule that is all too well known to vintners in the deep south of Italy. Growers intent on obtaining fine quality must constant battle the vine’s natural fecundity; turning out a premium wine in such conditions is the prize of persistence as much as of enological competence. Both those virtues have paid large dividends in the hilly Avellino district of Campania, which is sealed off from the Bay of Naples by the enormous bulk of Vesuvius. The area is the homeland of three of Italy’s most impressive wines, the white Fiano di Avellino and Greco di Tufo and the red Taurasi. The native varieties that yield all three wines – Aglianico, Fiano and Greco – are believed to be direct descendants of vines prized by the Romans and cultivated by the Greek colonists of southern Italy before them. In fact, the ancient Greeks so valued this part if Italy that they called it Oenotria – the land of the grapes.

Apulia, which forms the ‘heel’ of the Italian boot, is a major wine producer. In the past, a few producers of outstanding Salice Salentino, vinified from the indigenous Negroamaro grape, have been the bearers of the quality standard in the region. Also, Apulia has introduced international varieties like Cabernet and Chardonnay and are stimulating an improvement in field and cellar techniques throughout Apulia’s several wine zones.

The main grape cultivars of the Southern Peninsula are: 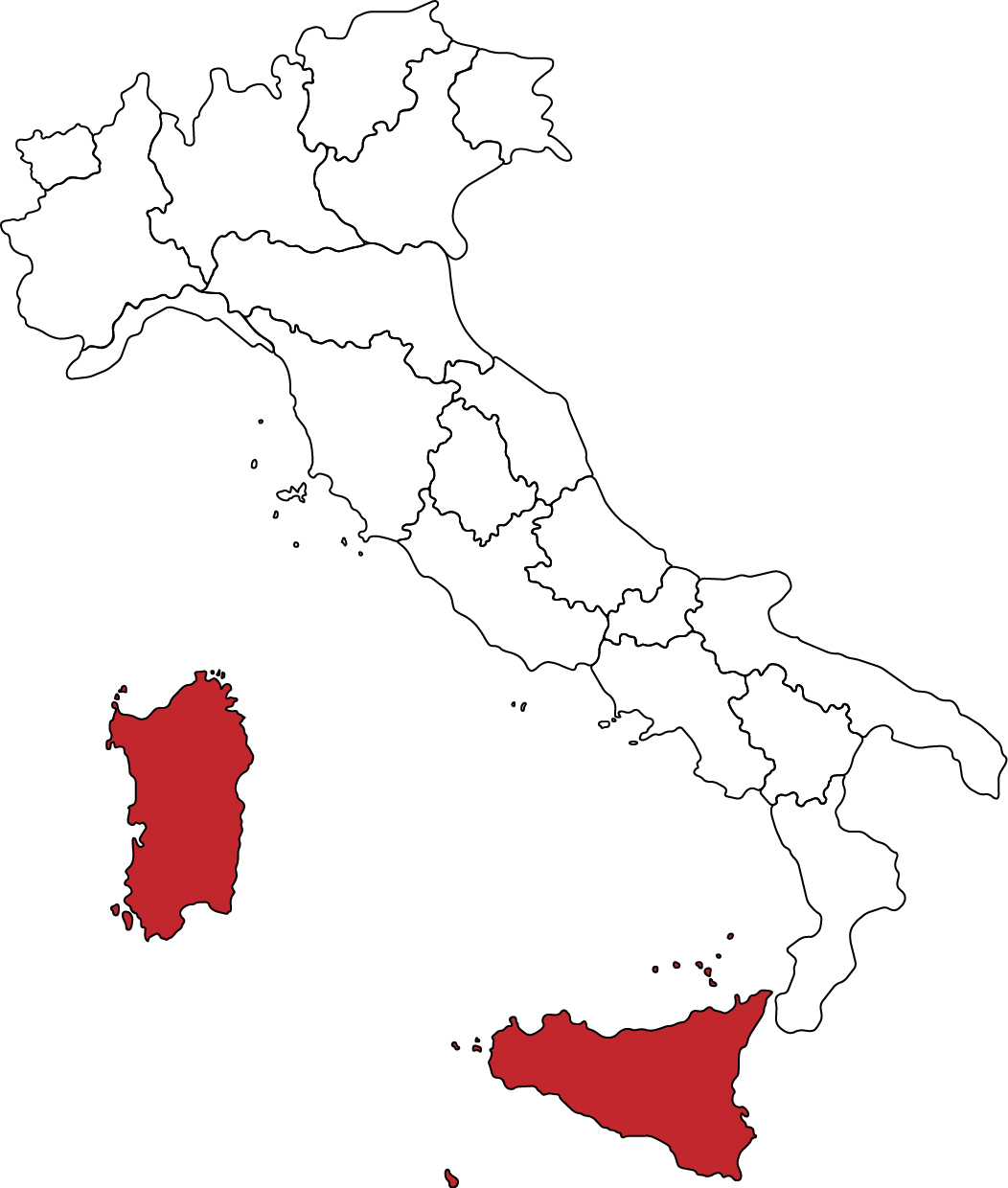 Sicily and Sardinia amount to worlds apart, separated from each other and from mainland Italy as much by history, language, culture as by water. The two islands resemble each other, however, in that each is a prolific producer of grapes and wines in an ample range of types and styles. Some of the best Sicilian output consists of proprietary wines outside the DOC system. These include newly introduced varieties – some remarkable successes have already occurred with the international favorites Cabernet and Chardonnay. But by and large, Sicilian winemakers appear to be banking much of their enological future on the development of native varieties, some of which – such as the red Nero d’Avola – certainly offer outstanding promise. The exciting zone around Mount Etna shelters a whole range of native red and white varieties, many of which yield wines that are not only delicious but also unique. They should appeal strongly to wine lovers who are seeking new horizons. Sardinian vintners have never relegated their indigenous varieties to the background. They have simply found a place in their vineyards for new types as they arrive on the island. For example Vermentino, a white variety that apparently originated in Spain.

Sicily and Sardinia can boast a proud tradition and newly strengthened popularity in one special field: dessert and aperitif wines. The greatest of all Sicily’s dessert wines is unquestionably Marsala. After a long period of decline, this wine, which was created in the 18thcentury by English wine merchants, has been restored to its ancient glory.

The main grape cultivars of Sicily and Sardinia are:

Find out more about our award-winning wine collection, join exclusive tastings and get access to specials from our cellar.